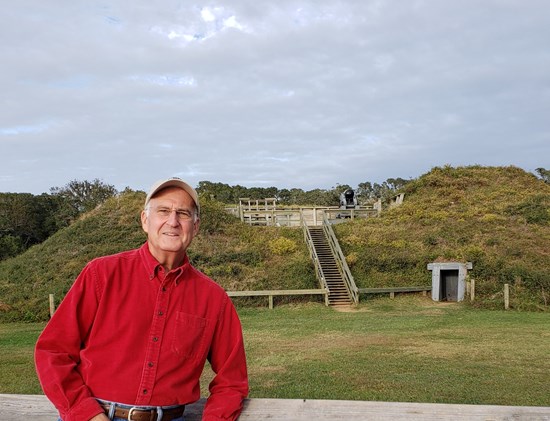 On October 30, I attended a fundraising event by the Friends of Fort Fisher at the Governors Club in Chapel Hill to raise money for exhibits that will be at the new proposed Visitors Center at the Fort Fisher Historic Site. The keynote speaker was historian Fred Kiger, who gave a very interesting presentation about the significance of this site during the Civil War, and later during World War 2.

On November 2, Jane and I attended another event by the Friends of Fort Fisher held on the grounds of the Fort Fisher Historic Site. The highlight of the evening was a cannon firing during a beautiful sunset. Those who attended got to see a re-enactment team load, fire (very loud), clean the cannon between firings, reload and fire again. There was also a very informative explanation about the operation of such cannons and the different types of cannon balls and devices that were shot from similar cannons during the Civil War.

The Fort Fisher Historic Site is the most visited historic site in North Carolina. If you have not visited it, or visited recently, I encourage you to go. It is not only interesting historically, but it is also a very beautiful setting.